Just added to your cart

Adding product to your cart

Mold (fungus) is found in all environments where it plays a vital role in our ecosystem, biodegrading waste organic matter (old leaves, un-picked fruit, etc.). Mold is unique in that it is an allergen (can make you sneeze or cough), it produces toxins (chemicals), and it can be a pathogen (that may infect). Mold can be visible or nearly invisible when it first begins growing on a surface and when the spores are airborne. Although musty smells can indicate mold growth, mold can also grow without creating an odor.

Allergenic molds affect people who have allergies, respiratory illness, or asthma. These molds can cause a hypersensitive reaction resulting in an extreme inflammatory response in the respiratory system. About 20%-30% of the population is susceptible to mold and/or other allergens, that lead to reactions like allergic rhinitis. People without allergies are often unaffected by these molds in small amounts.

Toxic molds produce mycotoxins, poisonous chemicals dangerous to humans. Unlike allergenic and pathogenic molds, toxic molds intentionally harm other living things rather than merely being a side effect. Some of the most deadly chemicals on the planet are mycotoxins. People are exposed to mycotoxins via inhalation, ingestion, or dermal exposure (skin contact) which can lead to debilitating cognitive symptoms or even organ failure.

Antigenistic molds act as super antigens in the body of a mold sensitive patient. These super antigens are not easily processed by the body and often result in auto-immune symptoms and diseases.

1. Evaluate What Needs to be Tested.

Evaluate all areas that should be tested including vehicles and even pets.

Test areas that are known or suspected of having water leaks (e.g. – roof leaks, flooding, pipe leaks, etc.) If specific areas cause sneezing and coughing, they should be included. Include more than one mold plate in large areas or rooms.

We recommend testing each of the following areas:

2. Test Your Rooms, Cars, and Surfaces for Mold.

Test as soon as possible, but do not open mold plates until you are ready to use them. Use all plates at once.

3. Seal With any tap and Label Plates

4. Leave these plates for 3 to 4 days and after that observe and do self-evaluation 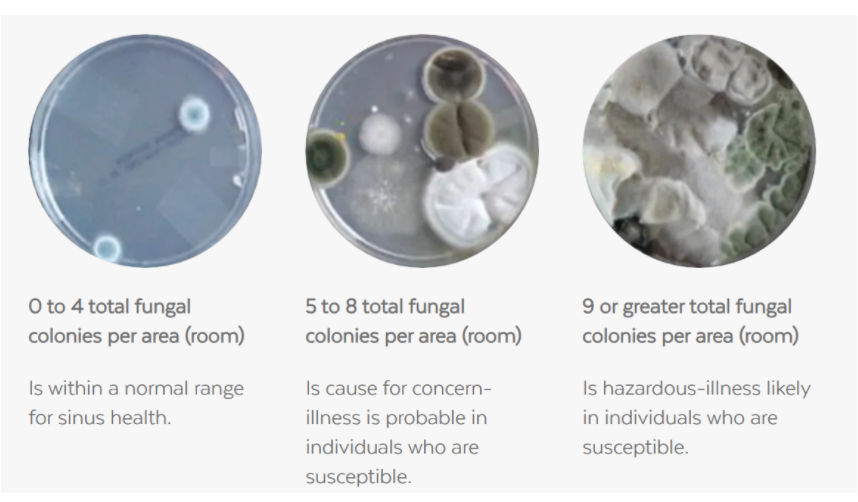